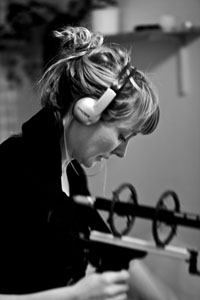 Ylva Henrikson worked as a dancer and choreographer for many years in countries such as Sweden, UK, Italy, Switzerland, Palestine and Japan. Creating performances, art platforms, work shops, and live productions involving multiple artforms such as film and dance (see dance projects here).

As a filmmaker Ylva has created film documentation for various choreographers, theater companies and established dance institutions, for example Dansens Hus, since 2006.

2012-2014 she studied documentary filmmaking at Biskops Arnö in Sweden.
Since then Ylva has been creating short documentaries, music videos as well as a short about the creation of Mark Cousins film Stockholm My Love.

A recent short doc – In 90 Degrees Heat – was shown at Swedish national television and at many filmfestivals, including Uppsala Short Film Festival, Tempo Documentary and Ivy Film Festival in New York. Receiving prizes for Best Directing in LA DOC and Best Film at Frame in Gothenburg.

Her latest short doc – A Visit Inside the Reservoir – is currently screening at Gothenburg Film Festival.

Ylva’s work with creating documentaries has been formed by a search of simplifying the need of information from the screen. To communicate a reality and its complexity through simple images and soundscapes in chosen locations.